We hadn't planned on seeing The Black Crowes, nor had we realised they were even playing what I believe was their first UK gig until three days before hand. Mike and myself had been at The Marquee to see the brilliant Ugly As Sin (see GIG 054) and found out they were selling tickets to The Black Crowes for later that week. I don't think either of us had actually heard anything from The Black Crowes but we had seen them talked about a lot in Kerrang, Metal Hammer and other music magazines - and they seemed to be getting a lot of rave reviews.
So we brought tickets. They were only maybe £4 or £5 I think, maybe even less.

When we arrived at the venue there was possibly the biggest queue I'd ever seen outside of The Marquee wanting to buy tickets. We could have probably sold our tickets for easily ten times the amount we pad for them, but with all the hype we now *wanted* to see The Black Crowes.

The Marquee was packed, hot and very sweaty. Ok, so it could be pretty hot and sticky in their at the best of times, but this was sardined. The support band, SLIDE, were ok but certainly nothing special - but then I don't think anyone in there was at all bothered about the support.

Then came the big act of the moment... The Black Crowes!

Sadly I thought they sucked a bit. Really not my cup of tea. They were ok, but I didn't think they were anything special at all. I saw them again years later supporting The Rolling Stones at Wembley Stadium (GIG 221) and actually thought they'd gotten worse. Guess I should have taken the money I was offered outside but The Black Crows just never did anything for me. 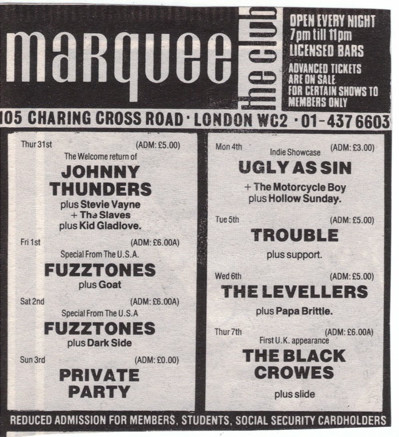