Considering we'd seen Something Happens playing The Marquee just three months previous (GIG 052) now seeing them headline the Town & Country Club in Kentish Town was a big jump up the ladder for this Irish band. They were fairly well known in Ireland but hadn't really broken through in the UK, not that you'd had known that on this night as they still managed to pack out the T&C.
I was there with Donna, Aiden and Zena and we only managed to catch the last bit of Dean Dwyer (I think we probably either spent a little too long in the pub or someone was late in meeting up, either way we pretty much missed him) but the main support was Trash Can Sinatras, whom I'd seen a few times by now supporting various bands. This wasn't the Trash Cans finest performance though. I found them a bit flat and slightly dull on this occasion, which was a shame as I knew they could put on a good show but everyone has an off night, or you might not be in the mood for their blend of music - it's one of the reasons why I usually give bands atleast two shots - just incase they weren't on form for some reason or my own mental state wasn't up for them on the first outing.

Something Happens were good fun once again. I actually preferred seeing them at The Marquee (I generally preferred smaller venues and still do, although the T&C is actually a pretty good size itself and was one of my favourite venues in the early 90s) but they put on a good show and left us all happy. 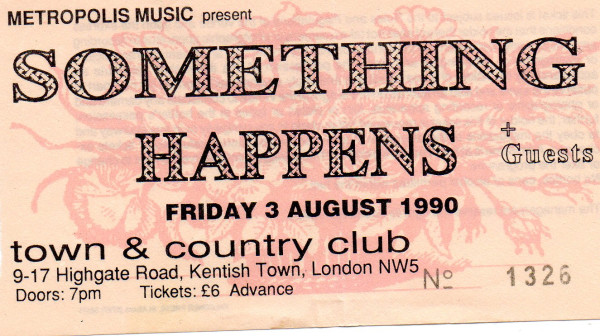