Aquarius (20 JAN-19 FEB)
Mercury moves into the house of repressed memories, so now is a good time to ask your parents why Uncle Frank is never invited to family gatherings

Aries (21 MAR-19 APR)
With a quartet of planets in your horoscope's most creative zone, you'd think you could come up with something other than your normal derivative shit.

Taurus (April 20-May 20)
Nobody ever gets over their first love, but a chance encounter this week will make you realise that they very quickly got over you.

Cancer (21 JUN-22 JUL)
Facebook, Twitter, MySpace – how many more ways do you need showing that nobody cares about you?

Leo (23 JUL-22 AUG)
Venus crosses your threshold for an epic, four-month stay, but still can’t remember to pick up his coffee cup and take it back into the fucking kitchen. What is his problem?

Virgo (23 AUG-22 SEP)
Just a thought, but have you considered threatening to kill one every hour until your demands are met?

Libra (23 SEP-23 OCT)
Saturn moves into Jupiter and asks you to sort out that hairstyle and for christ's sake get some new glasses.

Scorpio (24 OCT-21 NOV)
The direct motion of Mercury in your house clears away recent crossed wires and confusion. So why couldn’t BT do the same?

Sagittarius (22 NOV-21 DEC)
That feeling you've had since childhood that you were destined for something special will be borne out this week when you are slaughtered by an infamous serial killer.

Capricorn (22 DEC-19 JAN)
It is unusual looking, but if you can still use it to pee, I would not worry too much.

Apparently Games Workshop may be releasing a new edition of Space Hulk later this year.

Have to make some calls tomorrow to find out the skinny :)

I'm a big fan of Space Hulk so if this is true then I can't wait to see it! 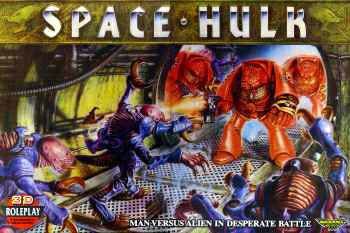 1. Being Human is possibly the best thing on television at the moment. This surprises me because most British made TV programmes tend to come across as being fairly cheaply made with poor dialogue and acting. Especially 'genre' programmes.
When I first heard of the show - about a vampire, a werewolf and a ghost living together - I thought it would be either cheaply done and badly acted (such as No Heroics which I did like but it wasn't exactly great TV) or just plain bad. But after watching my first episode (which was actually Episode #2 - I still haven't managed to see the first episode although that's available on BBC iPlayer nor have I seen last years pilot) my opinion immediately changed.
Being Human is a fantastic show. It's currently on BB3 but I hope it makes the transition to one of the main BBC channels soon so more people can watch it. The DVD comes out in April and it's on my 'Must Buy' list. If you haven't seen an episode yet go and check it out. Great scripts, great acting and great production work. 10/10.

2. I saw Frost/Nixon today. It's been a film I've been humming and arring about for the last few weeks. I'm really glad I did though as it's a great piece of cinema and very well done. I can see why it's got Oscar nominations. I don't think it will be to everyone's tastes. I like politics and polictical films and this was a fascinating piece. It was also very odd seeing a young David Frost portrayed on the big screen - it's certainly not a celeb I'd really given much thought to in the past as I grew up with him on TV as a chat show host. Seeing a film about him was a lot mroe interesting than I'd have ever thought possible. One of the really odd things about the film, for me atleast, was actually coming away from it with a bit (even a small bit) of sympathy for Nixon and his life. Ok, he brought it all upon himself and I still think he was one of the worst President s the US has had in my lifetime (toss-up between Nixon and Bush Jnr)  but the film does have him come across as doing what he really felt was right for his country (even if it was very misguided) and as a confused, lost and broken man after the scandals that led to him being the first President to resign in the US's history. Second favourite film of the year (after Slumdog Millionaire - which will really take some beating).

3. Rewatched "The Golden Compass" and Ang Lee's "Hulk" films whilst working today. I still really like The Golden Compass (apart from the ending where the film finishes before the end of the first book did and also the truly terrible Kate Bush clsoing credits song which I just can't listen to). I think the film was very well put together and acted. Now admittedly I'm biased towards the film as the His Dark Materials trilogy is one of my all-time favourite series, but I loved the way they portrayed everything from the Daemons, the Witches, the Polar Bears and the Gyptians. It's such a shame that the following two films will probably now never be made though due to the poor recpetion and box office figures the film received in the States. Ang Lee's Hulk on the other hand is still a steaming pile of poo. I only really watched it because I'm planning on seeing Edward Norton's The Incredible Hulk on DVD either tomorrow or over the weekend and felt I should see the first part again first.

4. Cubicle 7 was, at one point a couple of years ago, actually in discussions to license His Dark Materials as a Role Playing Game. They stalled due to the amount of money New Line was wanting for the license (it was unfortunately before the film came out) and also because we ended up getting another license for something else. I would love to see a His Dark Materials game at somepoint though.

6. I was going to also watch "30 Days of Night" this evening but after I put on the dvd I realised it was actually one I want to "watch" as opposed to just have on in the background whilst working. As I couldn't spare the time tonight to dedicate myself to it the dvd came straight off and I'll try to find time over the weekend to see it instead.

7. Gameforce on Sunday! Come and play games with me at The Black Horse on Rathbone Place (just off Oxford Street) from midday :)

8. Monday night see's the return of our Finchley Pub Drinks. The last couple of occasions in recent weeks have been cancelled due to a very inconvenient Monday for everyone followed by the snow from hell which closed everything (or seemed to) for the day. Hopefully this Monday won't see bad weather or any other problems and we'll actually be able to get to The Cather on The Rye in Finchley Central for drinks. Please feel free to come along if you're available and in the area!

9. Epic Fails of the day - Doing as much Dragonmeet stuff as I had intended - that's a job for Friday night and Saturday now. Also phoning John Wick (sorry mate) in the States for a chat (I'll mail you and rearrange). Also failed to talk to/reply to a couple of other people I needed to.

10. Ordered Adulthood, Gomorrah and Burn After Reading on DVD. I failed to see any of those at the cinema last year and really want to see them. Especially Gomorrah which I've been wanting to catch for ages (and seem to have missed entirely on the big screen).