To be honest, I have no idea how we ended up at this gig. I'm pretty sure it was one of those last minute "hey Angus, we have some spare tickets for a gig tonight, wanna come?" moments.

All I know is that I ended up having a really hectic and long day. It was Saturday and I was working but managed to somehow bribe my way into being able to leave two hours early so I could meet up with  Dawn, Paul and Mark and drive from London to Birmingham to see The Levellers.

Moonflowers, the support act, were a Bristol based indie-jazz-funk band. Now I'll be one of the first people to say I'm not generally a fan of the "jazz-funk" sound and have unfortunately seen a few dire bands in that genre back in the 90's - but for whatever reason my 20-year-old self seems to have liked Moonflowers looking at the diary entry for this gig. I can only imagine they put on a good show and had a good mix of tracks because the one song of their's I just played on Youtube to see who they were sounded appalling!

This was surprisingly only the third time I'd seen The Levellers (I saw them in 1991, 1992 and now in 1993!) but they had jumped venue size on every occasion. The NEC was massive and, apart from when I would see them at festivals, was the largest venue I'd see them in. To be honest I prefer seeing them in smaller venues or at outdoor festivals anyway as I find very few 'arena' gigs have the atmosphere and certainly nowhere near the same intimacy as even venues such as Brixton Academy.

The Levellers pulled it off though (no surprise really as they are one of the bets live acts out there - still are and always were!) and gave us a fantastic evening!

We then had to head back to London where I was supposed to be at a friends party that evening. I eventually got there just after 1am but as the party didn't wrap until after 6am I didn't miss anything ;) 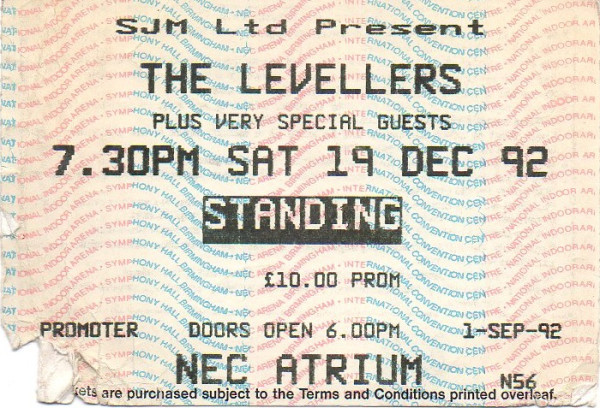