Wandering through the sparse page of Friends post this morning after breakfast and coffee (sparse as I last checked it before I went to bed and only a handful of people posted over night or in the wee hours of this morning...) I came across a new review by

mickmercer. This time he turned his attention to a Russian band I'd never heard of called DVAR.

There were a couple fo things that really stood out in the review and made me want to know more. One of them was the fact they sing in Enochian. So off to their Myspace page I went to learn more.

They remind me in places of The Knife, although they called themselves Indie/Gothic/Experimental there latest release is certainly a lot more on the Electronic side of the music spectrum. 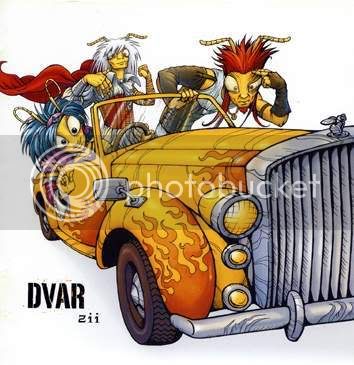 I'm definitely going to have to track down more of there material.

About DVAR
As the legend goes, DVAR was the name of the creature that came in a dream to one of the future band’s musicians. The creature unfolded its special mission, its “evocation” and the “chosen ones” for whom the message was meant. Afterwards, the band members (who didn’t even intend to make a band before) went into creative work, combining it with spiritual practice. This was the beginning of DVAR... Today DVAR is one of Russia’s most significant dark scene projects.

DVAR play a weird mix of music with the elements of gothic, avant-guard, minimalism, ethno, electronica, etc. and sing on their own language. Some call it "fantasy pop", some call it "lightwave".

DVAR: Bees in the Bonnet

Contemporary music holds two types of artists: they easily split, some being “revolutionists” and the others, “conventionalists”. The former would hardly release anything resembling their previous works, while the latter spend decades re-singing one and the same old song. By way of example, SPARKS began at one time with the first-wave rockers and then played electronics and new wave, even disco! And say ROLLING STONES, whose latest release is but one step removed from their debut works dating back to the 1960’s. David Bowie and Alice Cooper, distinguished glam rockers that they are, make a perfect “revolutionist” and “conventionalist”, respectively... We should note that artists rarely love experiments and would rather chew over the familiar tunes, especially if it’s productive of money — it’s easier and juicier that way. However, there are exceptions to the rule, who choose not to follow the easy way to glory. And this makes the wonderful world of music even more colorful!

This article deals with one of the most significant followers of the “revolutionary line”. Russian project DVAR (DVAR being the name of the astral creature that is believed to use the musicians as mediums) has already released six full-length albums, whose styles extend so far beyond musical frames that they call for an excusive name each.

Now, the very first album, Piirrah (reissued in Russia under the name of Taai Liira) was released in 2002 in Italy by Radio Luxor, a “dark scene” label known for releasing KIRLIAN KAMERA and LEGENDARY PINK DOTS. DVAR’s rendition of the darkwave was pathological to an astonishing degree: harsh electronics with hysterical dwarf-like vocals and neo-folk melodies. Coupled with the band’s conspiracy, mysticism, Bee Cult and fictional language, the delirious music was highly impressive. Some of the reviewers called this style “electronic black metal”, while experienced music addicts saw a peculiar medley of THE RESIDENTS, DAS ICH, RELATIVES MENSCHSEIN, SOPOR AETERNUS, Mike Patton and Diamanda Galas.

From 2003 onwards, DVAR’s albums were released by the Russian label Irond on a regular basis. At the same time we saw a cult grow up around the band which is now a significant player at the Russian dark scene. In Europe, leading alternative music magazines Orcus and Zillo traditionally give highest rates to the band’s albums. DVAR is also supposed to be a paranormal phenomenon, since their music is rumored to have mystical impact, and the internet is flooded with mysterious stories involving the band.

As for DVAR’s music, it metamorphosed greatly from album to album. As far back as the second album, Roah saw the old crushing electronics replaced by beautiful melodies, Middle-East coloring, flamboyant accordions and hints at academic minimalism. Actually, Roah was the benchmark that sent the musicians discover themselves in a creative journey. One could easily imagine a scenario where DVAR release twin brothers of their first album, year after year... Judging by the fact that most fans still worship Piirrah, we can assume that this situation would have won more limelight. However, the musicians chose the path of creative freedom and experiments...

The third album, Rakhilim marked the project’s final break over to the “lightwave” — a term coined by reviewers to denote the never-before-heard style. Rakhilim is 20 short musical sketches, light-mooded but dark-contained. DVAR did a very strange thing: they began introducing absolutely new, unexpected twists into the general darkwave basis, leaving the gothic devilry intact. As the result, reviews of the seemingly gothic band referred to the artists who probably don’t even know that there is a “dark scene”: Pascal Comelade, Tom Waits, Yan Tiersen, Michael Nyman, Wim Mertens, THE TIGER LILLIES, etc. Many fans regard Rakhilim as DVAR quintessence: on the one hand, the music is light and intentionally “childish”; on the other hand, it’s mysterious, suggestive of real occultism as opposed to razzle-dazzle. Quite a paradox.

In 2005 DVAR released two new albums, at the first and at the end of the year. Both had a greatly increased electronic component. (We are talking electronic in its initial sense, pertaining to careful sound synthesis and its peculiar toning.)

Hor Hor contained quite a range of musical components, from synthpop to ragga. The music was rhythmic and vigorous, full of funny sounds reminiscent of old cartoons. But for the notorious devilry and evil aftertaste, DVAR could have easily been brought to line with fancy acts like PLUXUS, DRAGIBUS and LITTLE COMPUTER PEOPLE. That was also the reason why DVAR’s tracks were included in compilations released by a label that had very little to do with the gothic scene — we refer to the popular releases of the label Snegiri, supervised by the famous musician and producer Oleg Nesterov, Easy Summer and Novomesto.

The album Oramah Maalhur was, in a sense, the reverse of Hor Hor. Unhurried, meditative, atmospheric, ambient — probably similar to ballads sung by aliens on their faraway planets. We could refer to this work as DVAR’s most serious, if this word is applicable to DVAR’s music, which remains beyond the framework of the traditional rating scale due to its strong postmodern base. As for the lovers of intelligent electronics and academic music, they surely discerned the delicate allusions to Jean Michel Jarre, Vangelis, Kitaro, Philip Glass, Terry Riley, Steve Reich and Meredith Monk. Allusions, carefully interwoven into DVAR’s own unique style.

Five albums at Irond and one silent year later, DVAR’s new message was released by the Russian label Gravitator Records. Naturally, nobody expected DVAR to come up with a copy of their previous works. And again, DVAR proved to be radical innovators hell-bent for experiments. Jraah Mraah is 30 shorts which, though logically developing the band’s ideas, are presented in a completely new fashion of truly “modern” and “stylish” music, in the finest sense of these words. Vivid, expressive “cartoon-style” pieces range from radiant to tragic; the album projects a painful feeling of a kids’ matinee in a mental hospital... The music is saturated with an incomprehensible, odd atmosphere similar to that of the movies of David Lynch or David Cronenberg. A feeling when you see a withered skull flash behind a clown’s mask, or a brightly colored chocolate wrap reveals a dozen dead earthworms... Indeed, DVAR’s mystical message that many strive to decipher begins to assume sophisticated shapes.

All in all, the very fact that such extraordinary music is released in Russia and holds a certain measure of renown, can be regarded as a major musical oddity. At another time, the musicians could have been forcedly treated in an asylum, while their works would have been of interest to beginner psychotherapists. People of extensive musical knowledge agree that there is no other act like DVAR in the world. Having listened to Jraah Mraah, everyone would agree. Let this be another reason to have a look at DVAR, if you still haven’t...

On Jraah Mraah DVAR’s mystical message that many strive to decipher begins to assume sophisticated shapes. Vivid, expressive “cartoon-style” pieces range from radiant to tragic; the album projects a painful feeling of a kids’ matinee in a mental hospital...

The album Oramah Maalhur was, in a sense, the reverse of Hor Hor. Unhurried, meditative, atmospheric, ambient — probably similar to ballads sung by aliens on their faraway planets.

Hor Hor contained quite a range of musical components, from synthpop to ragga. The music was rhythmic and vigorous, full of funny sounds reminiscent of old cartoons.

The third album, Rakhilim marked the project’s final break over to the “lightwave” - a term coined by reviewers to denote the never-before-heard style.

Piirrah, the band’s first album was released in 2002 (later re-released with bonus material as Taai Liira). This album claims to be the darkest and most sick piece of music ever created on the Russian scene.